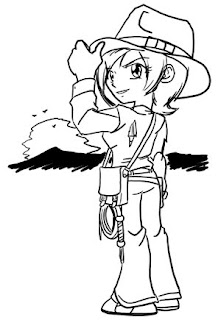 Bet you're surprised that I updated again huh? I guess given my track record, I would be too. Sometimes I shock even myself.

Well, this was a fun page to draw. I wish I had more of the script writt....eh...I mean, I wish that I had...er...so I could have added another panel...or...nevermind. The layout came out alright.

Panel 3 especially. I do enjoy a good look of shock.

I guess there's not really much else to say about this one. I should probably look at some other people's rants and see what they talk about. Be right back.

Aaaannnd I'm back. Okay, it seems like most people don't use them anymore. So...um? Goodbye? Nah, I'll just go on as normal.

So this chapter. Gonna be fun! Nudity? Not gonna be so much after this, and truthfully, I am wondering whether it was such a good idea in the first place, especially considering I finally remembered the original opening page for this chapter. You'll still see it, but later.

Ah whatever. It's MY comic right?

I hate street dates. I hate them. If something is done, shipped, and in the stockroom of my store, I should be allowed to buy it. This also goes for games that I don't want, just so as to not be a hypocrite. In this case: Lego Indiana Jones The Original Adventures. If it's ANYTHING like Lego Star Wars: The Complete Saga then I will be a happy Ayame.

Working on a couple other pieces. Nothing big, cause finals have begun. For some reason, this quarter's finals seem worse than usual even though I have fewer classes. Perhaps it's because most of the classes I dislike. Natural Science was fun until the holier-than-thou students began to talk. I enjoy open discussion and differing points of view, but when you talk for 45 minutes, and then when someone has their own opinion you start talking again until they shut up...not cool. 2D animation...I don't want to be an animator. I LOVE 2D animation, but I suck at it. Though I have been pondering a short animation for Newscast based on this. Advanced Photoshop. God, just kill me now. It takes a lot for me not to want to play with Photoshop for 4 hours, but this class has managed to do it. A combination of incomprehensible instructions, the 8 am time slot, and a general lack of time -it being the same day as my animation class- make this practically the worst of the bunch. There's another class, but I like it so I'm not going to mention it.

If anyone has read my Deviant Art blog, then you know my feelings on my art in general at the moment. If you haven't read it, don't. I was in what my kindhearted boss refers to as 'Emo Mode" and therefore it should be ignored.

Updates for OOM coming this week! Look for new links, and content on the Cast page!

I am beginning to work on a side project. It'll probably go straight to Deviant Art, but if it ends up going well then I might load it here or on another account. Maybe at Taymation if it ever goes back up.

I know I said there'd be a quiz, but I haven't been able to see Indiana Jones and the Kingdom of the Crystal Skull again yet. So you have one more week to prepare. Don't waste it. 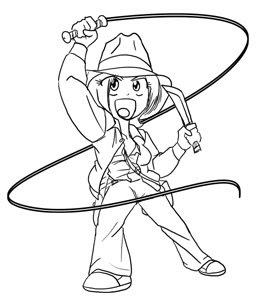 Well, like I promised I've uploaded a new page. Whee! Chapter 3 begins at last, and what a beginning it is. I have to say, from an artistic standpoint I am very happy with this page because I have finally put my life-drawing skills to good use. I don't think it's perverse since it's for the sake of the story, but I guess if you take it that way, it's your perogative.

By the way, someone asked me if I was PG-13 before this. The answer is: "I have no idea." Some websites say I've already had nudity in my comic so I guess not.

Regardless, humor is on the way!

So I hope you guys are enjoying -OOM- so far. Yes, I realize that it's not much besides an excuse to update the look, but I consider it to be kind of like a re-launching for the comic. Kinda like when they transitioned from Sailor Moon to Sailor Moon S, or when they went from Love Hina to Love Hina Again. Consider this that transition, and hey, free archive. You guys have been wanting one for like, ever.

-Gradients are not acceptable backgrounds. They look like CRAP!-

Why are you sitting there NOT watching Indiana Jones and the Kingdom of the Crystal Skull? It's a fun movie! It's the worst of the four, but it could have been so much worse. I'm not going to name any movies specifically - STAR WARS EPISODE 1: THE PHANTOM MENACE, STAR WARS EPISODE 2: ATTACK OF THE CLONES, STAR WARS EPISODE 3: REVENGE OF THE SITH, JURASSIC PARK 3, SPIDER-MAN 3, X-MEN 3, and there are probably others I'm not thinking of- but really, it's a good flick. See it twice. The second time is MUCH better.

I have replaced BioShock and (thanks to a generous co-worker) Mass Effect finally. After replaying BioShock, I've added it to my top 5 favorite games of all time. It never gets old for me. SHAME ON YOU, 2K FOR PUTTING IT ON PS3! YOU AND CAPCOM HAVE NO SCRUPLES! It's not that I MIND it being on PS3, but I hate them acting like disobedient children about it. I mean, they drop hints, then lie, they deny it, then finally it's like "Oh, okay. We were doing this all along." It annoys me.

I want this. BADLY!

I'm out of things to talk about. So I guess I'll be off again until next Saturday. Until then Newscast fans! And by the way...next week, there's a test on Crystal Skull. be prepared.

Gonna be quick since I am gonna update this again tommorow when the comic goes live. Well, welcome to Newscast -OOM-. What is -OOM- you might ask? That's for me to know and YOU to...well, not know. Not now. Either way, it means many things to you, the reader. Here's a few of them.

But, it also means:

#1. The archive will soon be smaller cause chapter 0 is going bye-bye.

"Put your hands down will you? You're embarassing us." 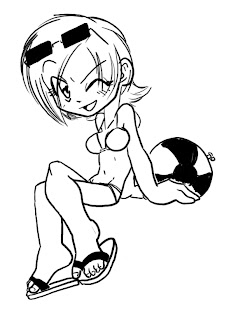 It's summer time finally, and even though the only place I'll be seen anywhere NEAR a swimsuit is on this post, it does make me fell good.

Today marks the end of Chapter 2 at long last. Are we sad? Happy? Mad? Perhaps just gassy? I don't know. I for one am happy. The last panel I think turned out well. I also kinda like the layout. Not my best, but passable.

So what now? I guess only time will tell. If you come back next week will something new be up? Sources say yes. What will it be? I guess you'll have to come back and find out.

Finally got my new DVD burner. I haven't had much time to test it, but I can tell you it looks like ass. I have an eMachine and anyone who has ever seen one knows that they make the case as incompatable with non eMachine hardware as you can imagine. So my DVD burner is now mounted INSET in my machine. I have to reach inside to use it. *sigh* At least it was cheap. And if it works, I could care less.

Been playing Lord of the Rings online a bit lately. kinda fun. I miss CoH. I hope I can afford to play again someday.For those of you wondering, my LoTR account was a gift from someone, so it's not just a matter of paying for CoH instead. 'Sides, I DO like LoTR.

Sometimes, I am proven wrong. NOT OFTEN MIND YOU, but sometimes it happens. One of my friends from Salt Lake actually flew all the way down here just to go see Iron Man with me. Yes, he flies for free, but it was still so nice to finally see a friendly face again. Unfortunately, I lost all self control around him and spent a lot of money. There goes the ol tax return. *shrug* It was still a great day and a much needed reminder that I do still have friends.

"Oh see, Stan Kulter worked on it. He's always a weak point in any film."
"Are you just saying random things to the credits?"
"Yes. Yes I am."